Everything you need to know
Be prepared for your next trip 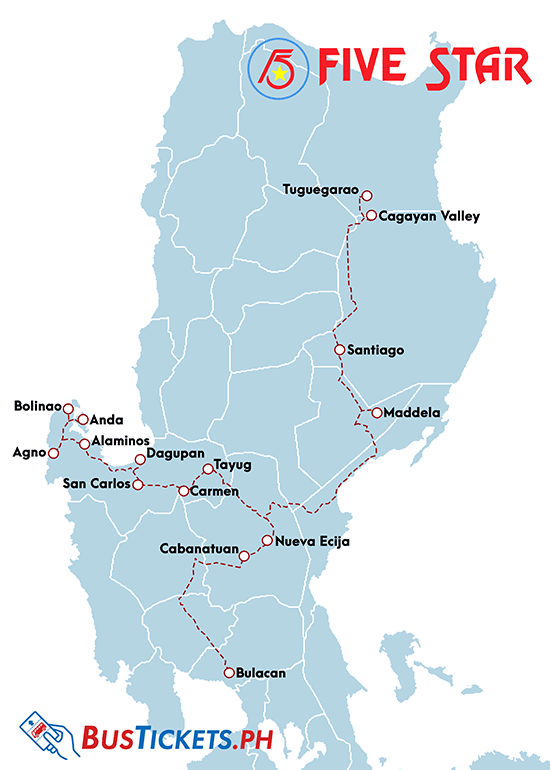 BusTickets.ph is the travel platform where you can compare and book tickets from over 40 Philippines transport companies. Five Star’s tickets are available on BusTickets.ph 24/7. Simply sort the results by the cheapest, fastest or smartest routes to find the best option for your next trip.

Use the search tool above or click here to book.

Who are Five Star Bus?

Pangasinan Five Star Bus Company is one of the largest bus companies in the Philippines. The company was founded in 1983 and started as an operation of ordinary fare buses. It took management of three bus companies majorly transporting travelers in Luzon. This includes Bataan Transit, First North Luzon Transit and the 2010 Luzon Cisco Transport.

In the present, it now has several routes to key destinations in the provinces of Pangasinan, Nueva Ecija, Tarlac, Nueva Vizcaya, Quirino, Isabela and Cagayan such as Dagupan via TPLEX and via Carmen, San Carlos, Tayug, Bolinao, Anda, Agno, Alaminos, Nueva Ecija, Cabanatuan via Bulacan and via SCTEX, Cagayan Valley to Santiago and to Maddela, and Tuguegarao.

It is recommended to have your tickets reserved before going to the terminal, especially if you prefer specific accommodation types. For convenient Five Star ticket reservations and booking, visit https://book.bustickets.ph/en/

They have routes to various destinations, including the following: Pangasinan, Dagupan via TPLEX and via Carmen, San Carlos, Tayug, Bolinao, Anda, Agno, Alaminos, Nueva Ecija, Cabanatuan via Bulacan and via SCTEX, Cagayan Valley to Santiago and to Maddela, and Tuguegarao.

Their schedule for bus travel varies depending on your destination of choice.

The bus fare will depend on your travel destination and may range from P200 to P950.

How would you rate this company?